Back around the end of 2008, Senate Minority Leader Mitch McConnell had an overriding goal:  To make President Obama a one-term President.   He even acknowledged that last year:

On Fox News Sunday, Bret Baier asked him if he stands by his previous statement that “the single most important thing we want to achieve is for President Obama to be a one-term President.” McConnell confirmed that his goal remains unchanged.

Which is why Senator McConnell is having … issues these days.  You see, he also thought that Republicans would be taking over the Senate.  After all, “the numbers” were in their favor.  More Democratic seats had to be defended, and the election results from 2010 looked to him like it was a serious possibility.  So, in order to head off changes, he did a song-and-dance against changing Senate rules to Senator Reid at the start 2011, which he promptly … ignored once the session started.  Yes, he and his caucus went out of their way to obstruct,  filibuster, and generally delay any legislation.    Well, we saw how that worked out. 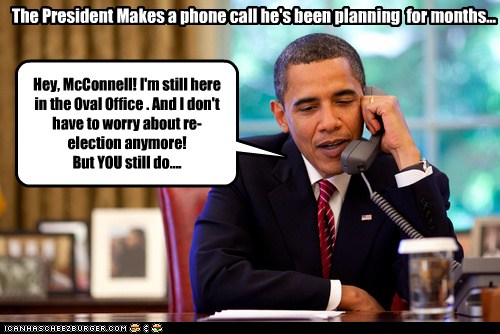 Yes, Mitch McConnell is an unhappy Senator these days.  Besides his party not winning the Presidency, they lost seats in the Senate.  To make things worse for him, the incoming Senate is talking seriously about changing the filibuster rules.

What Reid appears most likely to do is push for an end to the filibuster on so-called motions to proceed, or the beginning of a debate on bills or nominations. If Reid goes this route, senators could still filibuster virtually any other aspect of Senate business, including any movement to end debate and call for a final vote on a bill.

And Reid is strongly considering pushing for other filibuster changes, too — most notably requiring senators to actually go to the floor and carry out an endless talking session, rather than simply threaten them as they do now. Reminiscent of the 1939 movie classic “Mr. Smith Goes to Washington,” the idea has picked up steam in liberal circles — and its intent is to discourage senators from filibustering, though it would fundamentally change the very nature of the modern Senate.

Yes, Senator McConnell doesn’t like that at all.   Why, it could…

“poison” party relations in the upper chamber even further, adding that it would “undermine the very purpose of the Senate” and amount to “an affront to the American people.”

Oh, yes, jumping on that podium, flag wrapped around him, piously proclaiming his shock, shock that such a thing might happen!  Oh, how damaging to the collegiality of the Senate!   Except that he’s the one who has busily been poisoning the well the past 4 years, and demonstrating that his word is worthless.  Which wasn’t unnoticed by the Democratic Senators:

“The point I would make is that I’ve said from the outset is that a test of a good proposal is whether or not you could live with serving under it in the minority,” said Sen. Jeff Merkley (D-OR). “That’s why the talking filibuster is the right way to go. McConnell has broken the social contract. His team, under his leadership, uses it constantly and silently, out of public sight.

and in case you think that Senator Reid is in the mood to “let bygones be bygones?”

“The Republican leader thinks things are going well here. He’s in a distinct minority because things aren’t going well around here,” Reid said. “Lyndon Johnson: one cloture. Reid: 386. That says it all.”

Yes, yes it does.  He has spent the last 4 years betting that obstruction was a winning strategy, and that he could continue to “game” the Democrats.  Now that it turns out neither was the case, he’s whining and throwing tantrums.   Senator McConnell is learning that there are not just consequences to elections, there are consequences to not negotiating in good faith.    Putting it more crudely?  Payback’s a bitch, ain’t it?